On Wednesday evening, we joined the Sandaman’s bar crawl with a couple of our friends from ‘Paul’. Needless to say this was rather boozy and very fun. On Thursday morning we had to get up early in order to book our night-train to Amsterdam. You cannot book this particular train online so we had to take the tedious journey to Berlin HBF (the central station) and were subsequently told there were no seats left on any trains to Amsterdam that day.

This was a rather unhelpful discovery but in the end our own fault as we should have booked it the first day we arrived in Berlin. We racked our brains as to what to do next, as there were no beds left at the Comebackpackers Hostel and many of the cities on route to Amsterdam charged very expensive rates for last-minute hostel bookings. In the end, we decided to head back to trusty Hamburg where the Generator Hostel only charged €12 a night and was located right by the station. We would then get up at the crack of dawn and get an early train to Amsterdam so that we would not lose too much time.

We had the rest of the day to enjoy Berlin so we headed back into the tourist district in order to go to the ‘Topography of Terror’, a museum located at the site of the Gestapo headquarters. It is located right next to one of the only remaining sections of the Berlin Wall on Niederkirchnerstrasse. The museum was both fascinating and chilling. I read extract after extract of prisoners recalling some of the horrors they were subjected to in their cells. There was also a lot of information regarding the deportation of Jewish communities to various Concentration Camps, complete with photographs of many of the victims. Interestingly, after the war was over, many of the leaders of the Gestapo were not able to be testified against in court as they had been driven insane by what they had witnessed and taken part in.

After leaving the museum, we returned to the Holocaust Memorial for some some time wandering through the vast numbers of stone blocks and discussing what we had learned in Berlin. It was soon time to return to the Hostel and decide on what to eat for dinner. We had mentioned using the aforementioned BBQ as the weather so was glorious. Fortunately, a couple of our friends from ‘Paul’ were also in agreement and we went buy our ingredients. Unlike in the tourist section of Berlin, the Kreuzberg district was incredibly cheap. We bought half a kilo of marinated chicken wings and 400g of lamb fillets for less than €8. We feasted upon Barbecued lamb shish-kebabs, chicken wings and doritos with home-made guacamole. We would be very sad to leave this hostel! 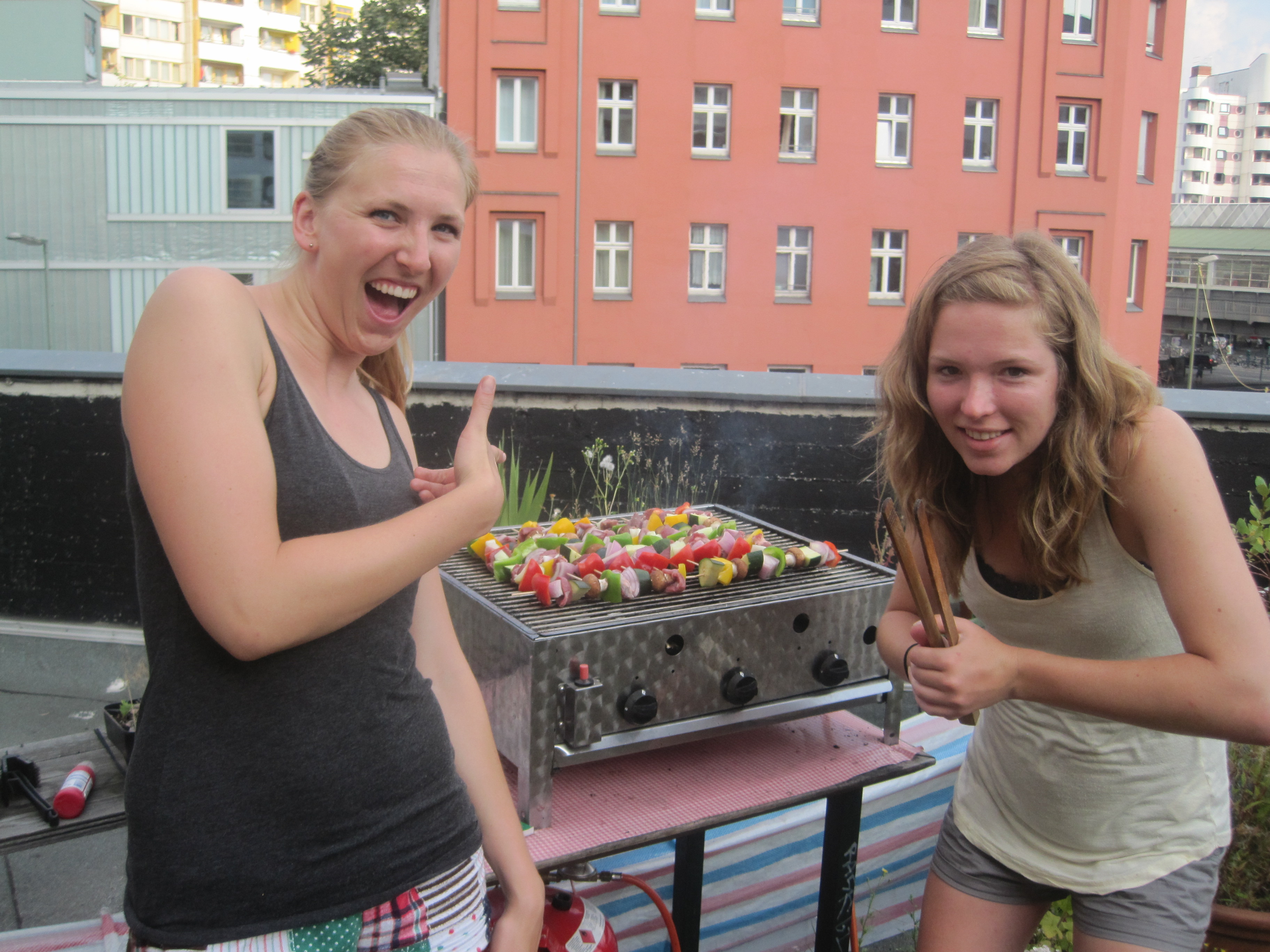 An hour before our departure, we said our goodbyes and made our way to the Berlin HBF to catch our train to Hamburg. We arrived in good time to the Generator Hostel and headed straight for bed as we had to get up at 6:30am. At this point we met our second ‘crazy’ person. The Generator Hostel is used by young travellers, but for some reason there was an old man sitting on the top bunk of one of eight beds in the dorm. We mentioned we were heading for Amsterdam the next day and the first thing he asked was if we would like to buy some drugs in Amsterdam (answer being no in case you were wondering). He then asked us if Jesus had ever ‘come’ to us, and pointed to his arm which was adorned with Jesus’ name in Biro. He then told us that Jesus is going to return and burn us in hell. At this point we crept into our bed wondering what the “Hell” had just happened.

This was not our only interesting moment in the dorm. There are large metal lockers under the bed where you can padlock your bags to protect them from thieves. I woke up and attempted to open my padlock and it would not budge. I have had the same padlock with the same code for two years, yet at this moment, it had decided it never wished to open again. We had 40 minutes to catch our train and I was gripped with panic. I ran to the desk in my pyjamas and told them what had happened. A friendly German behind the desk told me he was an expert with padlocks and followed me up to my dorm to try and break the code. Needless to say he was unsuccessful, despite attempting 20-minutes worth of combinations. In the end he brought up his industrial-sized bolt cutters and murdered my padlock. We just about had enough time to catch our train to Amsterdam, which personally I thought was a bit of a miracle.