On Tuesday, we arrived at Berlin full of anticipation and excitement. Having previously forgotten to check where our hostels were located in Copenhagen and Hamburg, we had the sense to look up the street of the ‘Comebackpackers Hostel’ before we boarded the train. For about twenty minutes, we traipsed through Adalbertstraße in the Kreuzberg district trying to find the right number, feeling increasingly uncomfortable with the area in which we were meant to be staying. The walls all around where covered in graffiti and there were some pretty interesting characters wandering around, as well as numerous beggars. After wandering around in circles, it turned the hostel was actually right next to the U-Bahn Station. We stood outside the door deciding whether to just bolt and go find another place to stay, but in the end we thought we should give the place a chance. This certainly turned out to be the right decision.

The Hostel was by far the friendliest we have stayed in. There was a large communal area with a kitchen and lots of comfy sofas. The Wifi actually worked for once which was a bonus. The best thing about the hostel was an outdoor terrace complete with BBQ and lots of seating. The sun was shining the whole time we stayed in Berlin, and it was so lovely to relax outside with people we met at the hostel. We slept in a room called Paul (why it was called Paul I will never know) which contained 16 beds and was full of lovely, chatty people. The only downside was that the room was akin to a furnace due to temperatures in Berlin getting up to 35 degrees during the day.

Having had such a great experience with Sandeman’s tour in Hamburg, we also decided to go on the one of their tours in Berlin. It began at the Brandenburg Gate, containing the grand statue of Victoria, the Roman goddess of victory, who stares down at the French Embassy. Our tour guide this time was Eric, a flamboyant American studying History in Berlin. He gave us yet another fantastic tour, helped greatly by his friendly personality and unusual facts gleaned from his studies. The heat was almost unbearable but fortunately Eric conducted much of the tour in the shade so that we would’t melt. 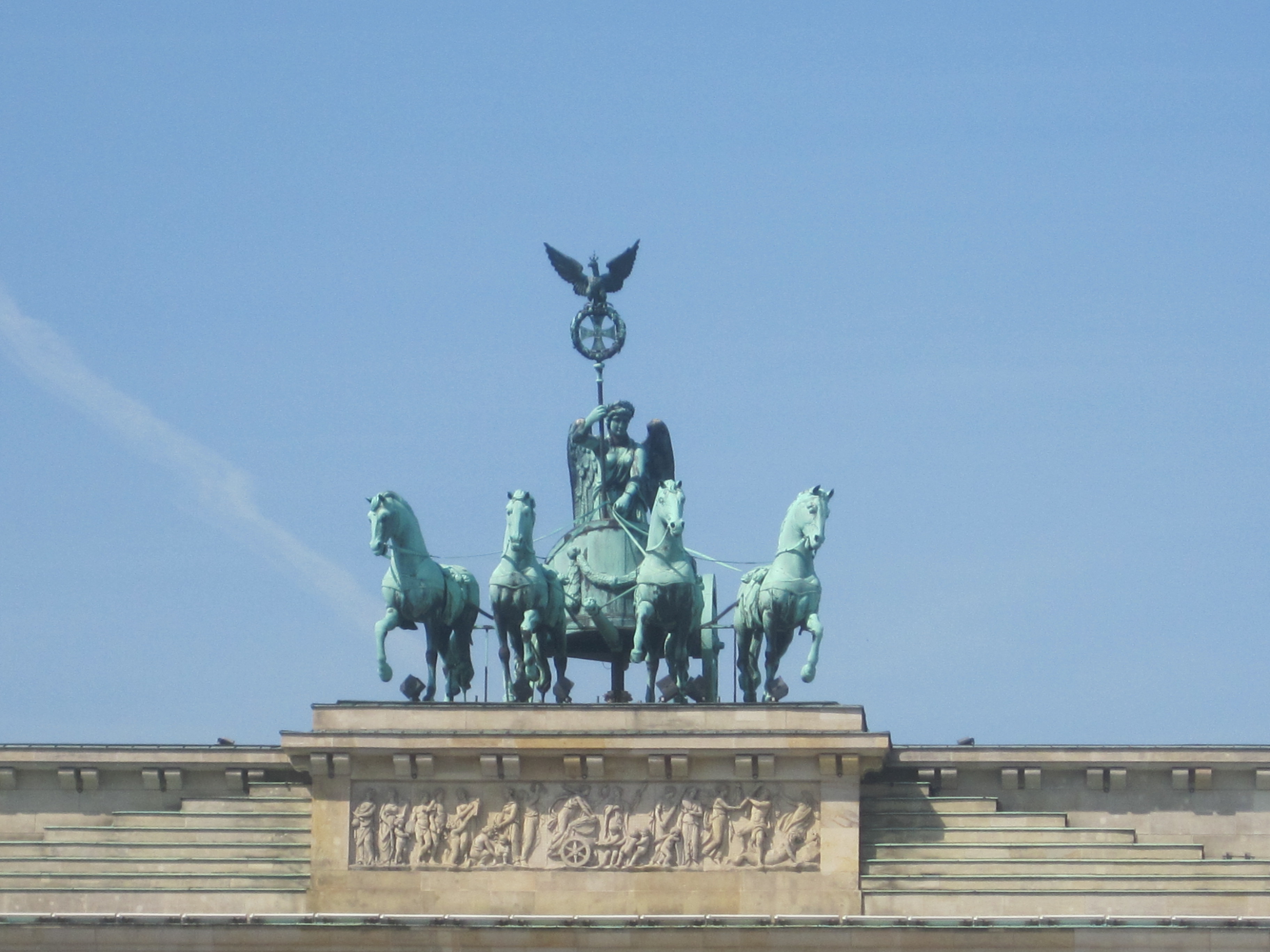 There was a lot to see and a lot to learn about, so I thought I would mention just a few highlights. As mentioned in my previous article on Hamburg, Germany continues to come to terms with the horrors that occurred during World War Two, particularly the Holocaust. This is especially true for Berlin, as it was a hub of Nazi activity and contained the headquarters of the terrifying and brutal Gestapo Secret Police. Right next to the Brandenburg Gate is the Holocaust Memorial, 2,711 stone blocks of varying size which cover 19,000 square metres of space. There is no way one can ignore such a spectacle, and people are able to walk through the maze of stone and contemplate what it means to them. Despite the fact that there are roads running all around the area of the memorial, if you walk to the centre, the stone blocks are so tall it is almost completely silent. It was decided that this memorial should be built in such a way that people will never forget those fateful events. It is very difficult to contemplate how this could have happened less than a century ago; that such cruelty and hatred was ever possible.

Moving on to a couple of decades later, the other history I found to be particularly interesting was the fall of the Berlin Wall. Nowadays, there are only a couple of sites where the wall still stands, yet it is enough to give you an idea of how depressing and claustrophobic Berlin was at this point in time. The Berlin Wall was 155 km long and 12 feet high, with only a few checkpoints allowing select people to move between East and West Berlin. It was a built as a result of Cold War, to prevent East Berliners escaping into the non-Soviet and more affluent West Berlin.

The most interesting story concerning the wall was its downfall in 1989. Günter Schabowski, the party boss in East Berlin and the spokesman for the SED Politburo, had the job of announcing new regulations concerning crossing the border. However, he had failed to attend the meeting regarding these new regulations and was basically forced to make things up on the spot when he was questioned by the press.  He mistakenly announced that East Berliners would now be able to cross the border into West Berlin.

After hearing this announcement, the East Berliners demanded entry through the check-points, and there numbers quickly grew to thousands. The guards at these check points no longer felt it was their jobs worth to prevent the thousands of East Berliners from passing through. They dropped their weapons and moments later the East Berliners jumped into the arms of the West Berliners and celebrated their freedom. Every bottle of champagne in West Berlin was uncorked and for three days the Germans got wasted and partied the night away.

I think Berlin has continued in this vein ever since.